Sunflower oil is the non-volatile oil compressed from the seeds of sunflower (Helianthus annuus). Sunflower oil is commonly used in food as a frying oil, and in cosmetic formulations as an emollient. The world’s total production of sunflower oil in 2014 was nearly 16 million tonnes, with Ukraine and Russia as the largest producers.

Sunflower oil is a monounsaturated (MUFA)/polyunsaturated (PUFA) mixture of mostly oleic acid (omega-9)-linoleic acid (omega-6) group of oils. The oil content of the seed ranges from 22% to 36% (average, 28%): the kernel contains 45–55% oil. The expressed oil is of light amber color with a mild and pleasant flavor; refined oil is pale yellow. Refining losses are low and the oil has good keeping qualities with light tendency for flavor reversion. The oil contains appreciable quantities of vitamin E, sterols, squalene, and other aliphatic hydrocarbons.

In recent years, there has been an increase in demand for sunflower crops such as sunflower oil. Measures such as the development of hybrid sunflowers to increase oil production have been introduced to meet this demand. 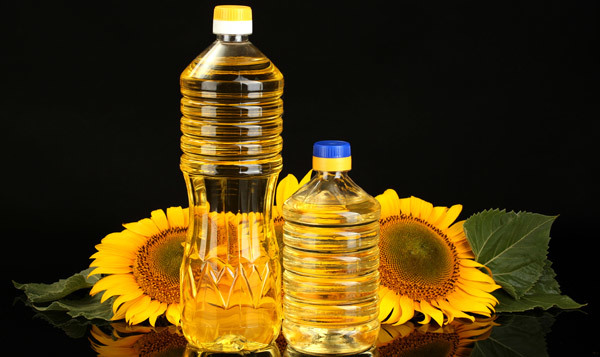